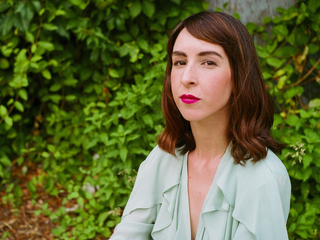 Danielle Damico is a multimedia artist whose work explores transgression, technologically mediated intimacy and climate change. She received her B.S. in Film, Video & Theatre from Stevenson University. Her works have screened at venues in and around Baltimore including 2640 Space, Mercury Theater, Red Room and Washington ArtWorks. Music videos have premiered in PunkNews, Baltimore City Paper and through numerous independent music blogs. Her immersive projection installation, What to Expect When You’re Expecting, was awarded the Johns Hopkins Saul Zaentz Innovation Fund in 2019. Danielle is currently pursuing her MFA in Intermedia & Digital Art at the UMBC and hopes to exhibit her work internationally.

Rogers, Taliaferro, Kostritsky, & Lamb [ RTKL ] Fellowship is made possible through the generosity of RTKL Associates Incorporated. RTKL was founded in Baltimore in 1946 and has since become one of the world’s largest and most comprehensive architecture and design firms in the world, with expanded offices throughout most continents. IMDA and the Department of Visual Arts are grateful that RTKL is determined to support emerging, creative leaders in the field of art.

Each year upon achieving their MFA Candidacy, typically after their third semester, one IMDA graduate student is awarded the RTKL Fellowship based solely on the merit of their presentation on Graduate Review Day. The goal of RTKL is to award an emerging artist of creative and scholarly excellence who has demonstrated a promise to make an impact on the field. Therefore, through a competitive process, the RTKL award seeks to propel that promising graduate student into their future career by financially contributing toward their thesis exhibition. Award recipients offer an artist lecture typical of an academic job interview or gallery talk around the time of their thesis exhibition.