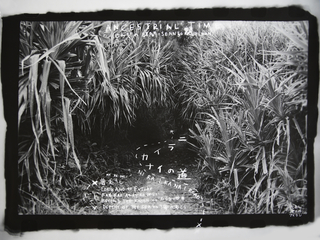 Chinen Aimi Bouillon's thesis exhibition "Theater of Tacit Operations" observes the forces at play within U.S. military occupation in Okinawa, Japan.
Bouillon works as a detective investigating matrilineal and patrilineal histories. She is an artist born in Okinawa, Japan, former Ryukyu Kingdom, to a native mother and a United States Marine father. Through framing territories of contradiction she analyzes the duality of everyday gender, power and war. Her art is the process of discovery and findings of matrilineal histories colonized by patriarchal narratives. The gallery displays images of Okinawa taken on a 35mm black and white film with photograms of signs and symbols transliterating the Ryukyu oral language and a table top with geographic outline of Okinawa island. The installation plays with the assumed hierarchy of knowledge.
0 Comments (requires login)