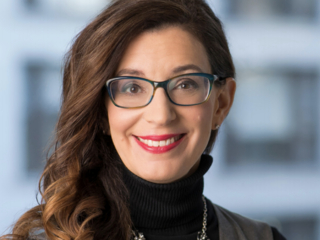 Tiffany Holmes is the Vice Provost for Undergraduate Studies at MICA. Holmes worked for eighteen years at the School of the Art Institute of Chicago where she developed an honors program and professional practices curriculum as a full professor and Dean. She received her BA in Art History from Williams College, an MFA in Digital Arts from UMBC, and a PhD from the University of Plymouth in the UK. Holmes began her teaching career as a Teach for America corps member and worked in the Baltimore City Public Schools during the early 90s. Her studio practice explores the potential of art and design to promote environmental awareness and sensitivity to shifting ecologies on the planet. Projects include a commission for the National Center for Supercomputing Applications where sequences of experimental animations visualize real-time energy loads. Her paper detailing this work, “Eco-visualization: Combining art and technology to reduce energy consumption,” earned a Best Paper award at Creativity and Cognition 2007 and a doctoral degree. She has lectured and exhibited worldwide: Museum of Contemporary Art Chicago, J. Paul Getty Museum in Los Angeles, 01SJ Biennial, Siggraph 2000, Interaction ’01 in Japan, ISEA Nagoya, Microwave Festival, Hong Kong. A recipient of the Michigan Society of Fellows research fellowship in 1998, Holmes has earned the Illinois Arts Council individual grant, an Artists-in-Labs residency award in Switzerland, 2010 Rhizome Commission, and a 2016 Distinguished Alumni Award from the UMBC.

Dr. Holmes will announce the MFA Award Tuesday April 18, 2PM in the CADVC at the RTKL Talk.