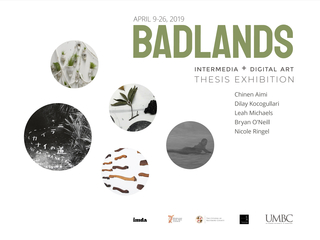 Badlands
2019 IMDA MFA Thesis Exhibition
Tuesday, April 9 – Saturday, April 26
Center for Art, Design and Visual Culture
Artists’ reception: Friday, April 12, from 5 to 7 p.m.
Satellite Events
The Center for Art, Design and Visual Culture presents the annual MFA Thesis Exhibition, featuring works by the five graduate students will who receive MFAs in Intermedia and Digital Arts in 2019. The work selected represents the culmination of each student’s unique experience in UMBC’s dynamic and demanding MFA program.
Chinen Aimi Bouillon works as a detective investigating matrilineal and patrilineal histories. She is an artist born in Okinawa, Japan, former Ryukyu Kingdom, to a native mother and a United States Marine father. Through framing territories of contradiction she analyzes the duality of everyday gender, power and war. Her art is the process of discovery and findings of matrilineal histories colonized by patriarchal narratives. The gallery displays images of Okinawa taken on a 35mm black and white film with photograms of signs and symbols transliterating the Ryukyu oral language and a table top with geographic outline of Okinawa island. The installation plays with the assumed hierarchy of knowledge.
Dilay Kocogullari’s installation – 300 ovary-shaped crocheted pouches, filled with living grass and hanging from the ceiling – is a memorial to the increasing number of women murdered in her home country, Turkey. On the walls appear videos of 70 Turkish participants who helped crochet the pouches in a collaborative act of resistance to femicide.
In Leah Michaels’ thesis video installation, she appears as surfer and priestess, performing last-rite rituals for the ocean, accompanying “her” – the sea – as “she” is dying. As viewers move through and around the installation, they create metaphoric currents, bear witness to the rituals, and join in mourning the ocean’s impending passing.
Bryan O’Neill is an intermedia artist utilizing sculpture, photography, and performance to create work which explores intersections of mankind and Nature. Focusing on American ideas of wilderness, survivalism, manliness, and absurdity he explores the ecological thought and the performance of masculinity in the culture of the outdoorsman. His process focuses heavily upon repetition to create installations which reveal hours of meditative effort through salvaged wood, camp rope, and resin.
Nicole Ringel's “Remnants, Remainders, Ghosts, and Continuities” is two translations of observed details, researched history, and traced paths gathered over the past year in the Hollins Market: a site-specific walking experience in Hollins Market, Baltimore, and an installation that employs undulating text, images, and movement to explore the relationship between body and landscape.
Admission is free.
0 Comments (requires login)