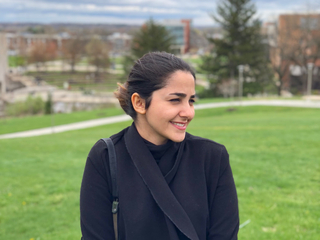 Chosen by juror Cara Ober, Parastoo Aslanbeik wins the MFA Award for her mixed media installation and written thesis “Wispobish: Forest of Ghosts, Tower of Voices.”
“I believe the most precious thing about winning an award is that it makes you more determined in your life and toward your goal. This has happened to me.”
Wispobish is a powerful tree in Persian mythology. The word “Wispobish”  in Persian refers to “the cure of every disease.”  Simurgh, a mythical phoenix-like bird representing benevolence, is  believed to nest in the Wispobish tree. In this artwork I employ the symbol of the Wispobish in response to the recent Executive Order # 13769 “Protecting the Nation from Foreign Terrorist Entry'”that attempts to ban Iranians and other Muslims from the United States. I utilize the old photographic technique of wet-plate collodion, in combination with tree branches, to create a ghostly forest. A fragile yet monumental structure constructed from white-washed cardboard boxes is inscribed with ancient Persian poems and silhouettes of branches. Amplified from inside the tower of boxes is a soundtrack of quiet songs and mumblings in various languages. Through my artwork I hope to evoke the voices of those who have been demonized and to offer healing through collective strength.
___________________________________________________________ The Intermedia and Digital Arts [ IMDA ] MFA program is pleased to announce the IMDA Friends + Alumni fund, founded and inspired by IMDA alumna Mina Cheon '02. The primary objective of the fund is to award $1000 for the most outstanding MFA exhibition and written thesis. Each year a qualified arts professional will serve as a juror for the award. This MFA Award is inspired by those who wish to boost the emerging career of promising IMDA alumni, especially impacting the transitional year following their MFA.

We are grateful to Mina Cheon, the founding alumna of this award. Friends and alumni who wish to donate to the award should contact the Graduate Program Director [lmoren@umbc.edu], the Department Chair, or imda@umbc.edu. MINA CHEON  [ MFA, PhD ] is a Korean American global new media artist, scholar, and educator who divides her time between Korea and the United States. Cheon has exhibited her political pop art known as “Polipop” internationally and draws inspiration from global media and popular culture to produce work that intersects politics and pop art in subversive and provocative ways. In particular, Cheon has worked on North Korean awareness and global peace projects since 2004 and appeared to the world as a North Korean artist KIM IL SOON since 2013. While she creates work that ranges in medium from new media, video, installation, performance, and public projects to traditional media of painting and sculpture, the content of the work is in historical alignment with appropriation art and global activism art. Her work has been exhibited and | or is in the collection of the Sungkok Art Museum, Seoul Olympic Museum, Busan Biennale 2018, American University Museum, Smith College Museum of Art, Baltimore Museum of Art, Maryland Art Place Contemporary Art Center, Insa Art Space Korean Arts Council, C.Grimalis Gallery, Lance Fung Gallery, Trunk Gallery, and she is represented by Ethan Cohen Gallery in New York. Cheon is the author of Shamanism + Cyberspace  (Atropos Press, Dresden and New York, 2009), contributor for ArtUS, Wolgan Misool, New York Arts Magazine, and Artist Organized Art, member of the Board of Directors of the New Media Caucus of the College Art Association, and Associate Editor of the Media-N peer-review academic journal. She is also a full-time Professor at the Maryland Institute College of Art.